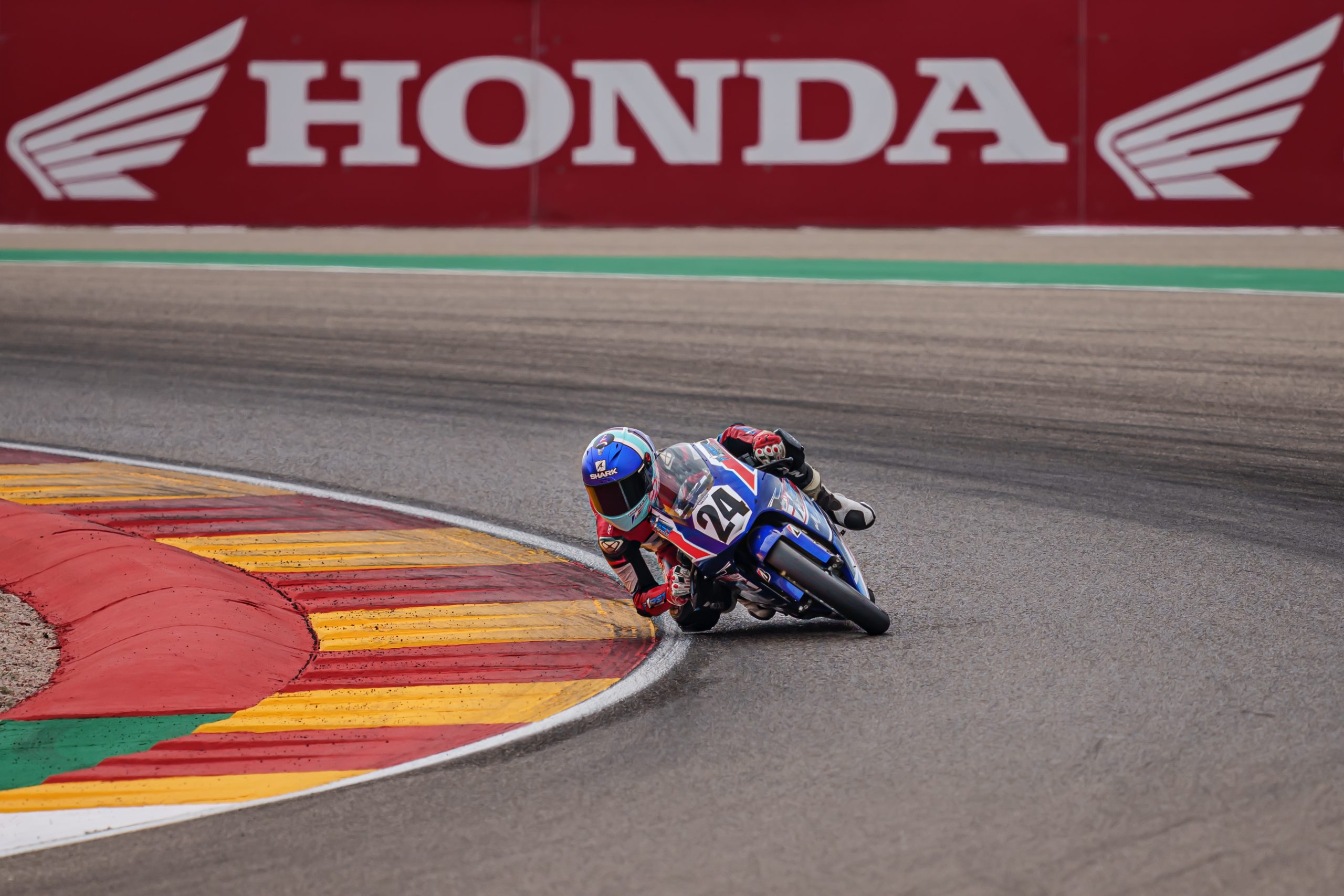 The sixth round of the Finetwork FIM Junior GP Championship takes us to the famous Motorland circuit near Alcaniz. After three months without a taste of competition, we arrive in Aragon with a crucial desire to be the best of the weekend for the penultimate round of the season.

After a very long summer break for the European Talent Cup, the best riders of this championship want to conquer the desert of Aragon and to show what they can do.

Straight from France and Spain, it is on this track that we find our three riders – Guillem Planques #24, Blai Trias #62 and Alvaro Fuertes #16.

Like all the time, the Thursday sessions are the subject of official tests, although no times are disclosed.

Nevertheless, the obevitves is the same, two distinct groups are formed. This time Alvaro and Blai are in group A and Guillem in group B. The first day for the riders is dedicated to do some good lap and to find a good rhythm for the end of the weekend.

The French rider is not on his favorite track and the desire to reverse this trend and make the team’s colors shine at the top, is the unsuspected will of the French rider.

While Guillem usually shows a higher rhythm than his Spanish teammates, for the first time we find this time our three riders at a similar rhythm.

Time for the official tests

Friday’s free practice session confirmed this trend, with all three in the same second, and they proved to be far from the reference times. Considering the results, Alvaro and Blai finished twelfth and fourteenth in their group, while Guillem climbed to an unusual 13th position. Our French rider, who was more behind than in the previous races, shared his feelings with us. The frustration of not beating his rivals led him to make some mistakes. From the top of his young sporting career, Guillem will have to work hard to provide good qualifications and hope to set perfect laps for the two races on Sunday in order to score some points in the championship.

The hour of the qualifying day rang. Alvaro made the most of his talent by clearly improving his time, he was ranked fifth in the day’s combined race, ensuring him a place on the third row on Sunday without any problems. However, Blai did not have the same rhythm of progression. On the other hand, in the last lap, he seized the right moment and did a good lap that qualified him for the next day’s races.

One of the most awaited moments of the weekend for Guillem. It is under a threatening sky that the French rider starts quickly to make a time. He manages to make a good lap even if some difficulties persist, the realized time is clearly better than the day before. It thus carries out the ninth time cumulated of the two sessions. He will start in 18th position on the starting grid.

The most important day

The two races will put to the test the skills of the three First Bike Academy riders, with their opponents in this high category from the lights out to the checkered flag.

The excitement of starting the first race on one of the emblematic tracks of MotoGp, a knowledge in this field in which Guillem is unbeatable. This is what he proves in the first race, he manages to integrate the second group, although he has difficulties to overtake his competitors. The desire to break records leads him to achieve good times in 2’02’0 and even an ideal time in 2’01’7 which represents a speed among the leaders of this new generation of talent. He crossed the finish line in thirteenth position. On his side Alvaro, with a little more difficulty than the previous days, did not take advantage of his position on the grid as he finished 18th. As for Blai, he finished 20th and made an excellent time that allows him to predict a good second race.

Concerning the second race, the riders hope to achieve better performances. On the Spanish side, the two riders are on the same pattern. Alvaro downgraded lap after lap, while Blai quickly returned to the pits due to a technical problem while confidence was present. As for Guillem, the speed and the confidence that this machine provides him to overcome some known difficulties of the weekend. Indeed, the only French rider with strong potential realizes an excellent race in term of rhythm. He fights all along the race for the sixth position but will unfortunately get to the fourteenth position, still due to his lack of confidence in overtaking.

A weekend which ends on a positive note for the team as for our French rider who, we recall it, is a circuit not very favorable to him. At the end of these two rounds we remember that we continue to score points in the championship. For the first time of this season, big difficulties were presented to us, and all the team, including Guillem, were able to work and to question themselves to avoid that this sixth round is as deserted as this desert of Aragon.

We would like to thanks our partners and the many people who follow us. We give you an appointment for the next round, on the circuit of Ricardo Tormo for the ultimate round of the season of the championship Finetwork FIM Junior GP. 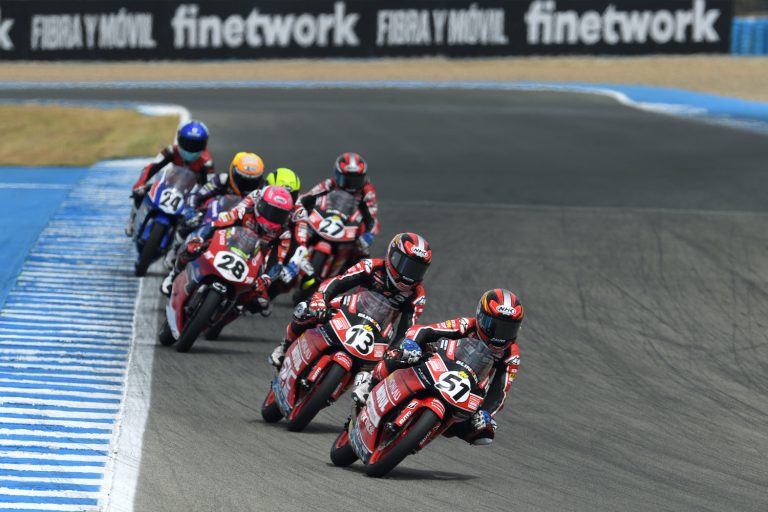 Tarmac, passion and speed – that’s what the new generation of talent came for at one of the most important MotoGP’s tracks. Indeed, straight from Spain and France, our young…

Leaving behind them the disappointment of Estoril, our First Bike Academy riders are meeting again for the Moto3 Hawkers European Talent Cup European Championship, at the Ricardo Tormo track in…

The third round of the FIM Junior GP World Championship is taking place almost at home. Indeed, it is on the circuit of Barcelona that the young speed enthusiasts will…

It’s finally time for the First Bike Academy to join the Europe Hawkers European Talent Cup’s championship.  This contest represents an unmissable step for every young riders who wants to become the future Fabio Quartararo. For our MotoGP students, it’s an amazing to show their talent on the track.  Indeed, it’s to provide the best chances for our students that the Academy have decided to join the championship. Elie Rousselot and Guillem Planques – our French representatives – are supported by two Spanish pilots (Alvaro Fuertes et Blai Trias) who are present to improve their riding technique.  The first round is on the Estoril route (Portugal), and allows the pilots to be places in… 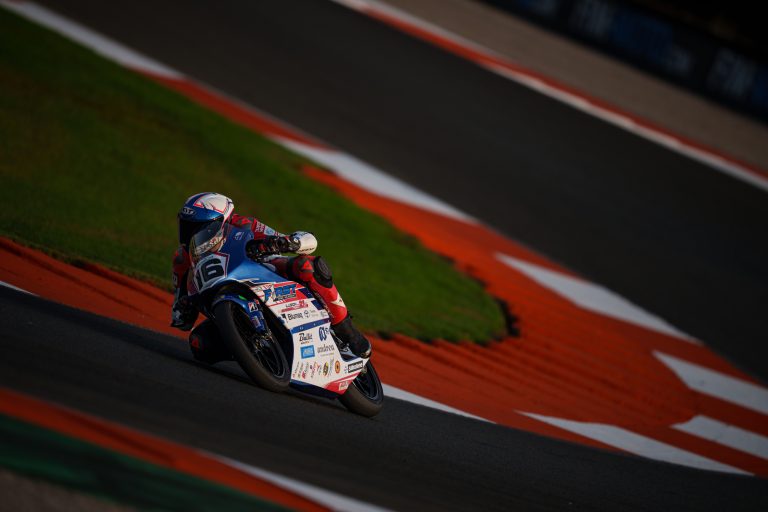 It is on the Ricardo Tormo circuit, track which will be the scene of the final of MotoGP in a few days, that the one of FIM JuniorGP takes place…. 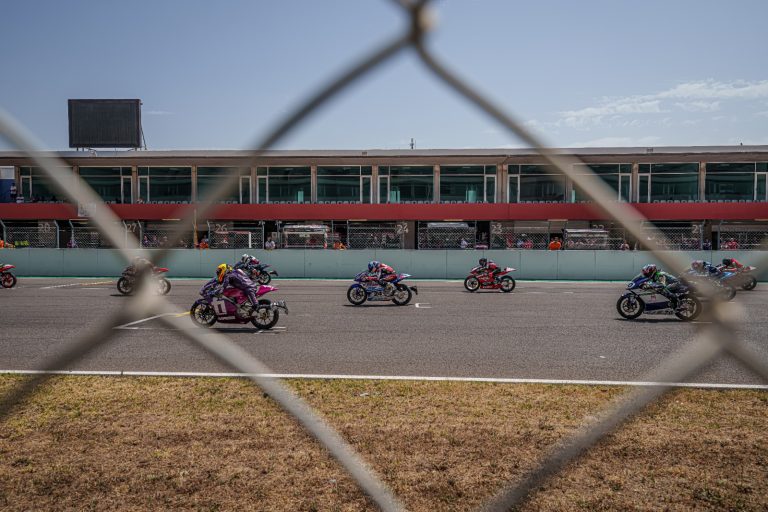 The Portuguese track of MotoGp is once again the venue for the fifth round of the Finetwork FIM Junior GP Championship. A tempting prospect, because the outcome of this Sunday…